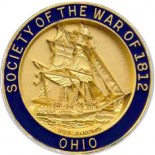 Compatriot John H. Smith passes away after heart surgery. He is also survived by his children: Patricia Smith of Lima; Colonel John J. Smith of Matthews, North Carolina; Dr. Sarah Waters (Robert) of Ada, Ohio; and Robert Smith (Melissa) of Matthews. He has six grandchildren: Alexander Smith, Shelby, NC; Samuel Smith, Matthews, NC; Donald Waters and Robby Waters, Ada, OH; and Kelsey Smith and Riley Smith, Matthews, NC. John was a 1952 graduate of Lima Central High School and the Ray Vogue School of Photography in Chicago. He worked for 43 years at Sears, Roebuck, and Company. After retiring from Sears, he worked for 17 years at the Lima YMCA. John was very active in Boy Scouts, serving as a scout-master for 12 years. He was a member of St. Rose Parish and the Sertoma Club, a past President of the Lima Central Catholic High School Band Boosters, and he was an accomplished watercolorist, winning recognition from the Lima Area Watercolor Society.

This entry was posted on March 21, 2018 by Ibis Press Studios in Uncategorized.

Archives of Past postings

Society of the War of 1812 in the State of Ohio

Society of the War of 1812 in the State of Ohio